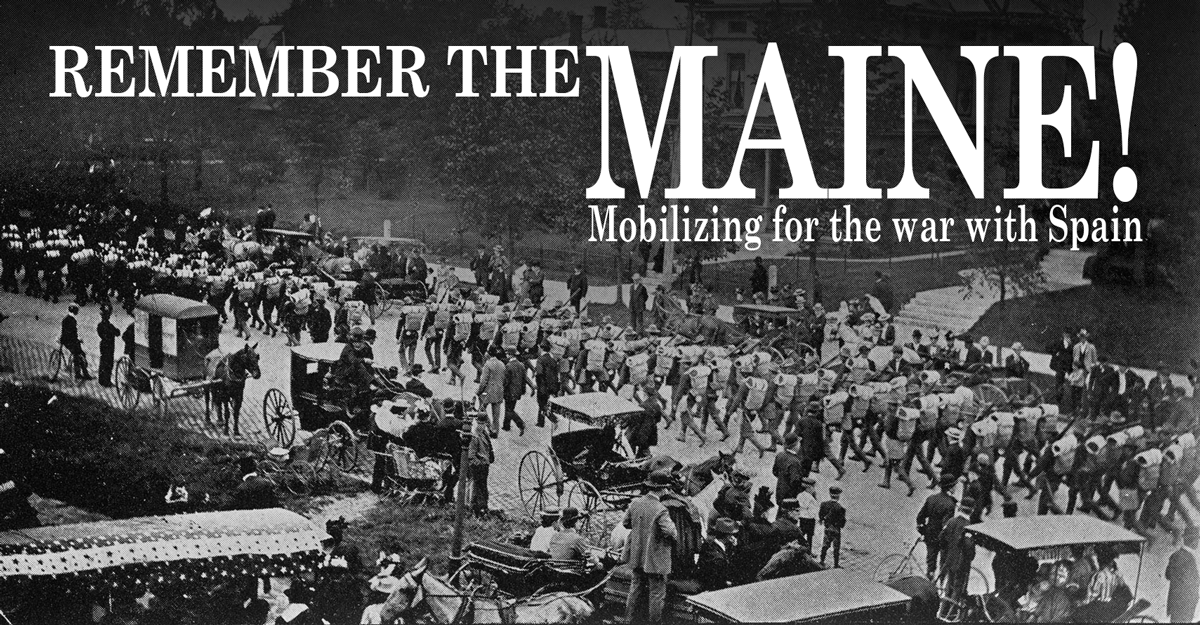 Soldiers from the 4th Ohio Volunteer Infantry depart Camp Bushnell as they march toward the train depot for transportation to Camp Chickamauga, Ga. A mass of people lined the route of march along Broad and High streets to the depot to honor the departure of the Ohio troops.

Mobilizing for the war with Spain

On APRIL 25, 1898, the United States declared war on Spain following the sinking of the USS Maine, an American battleship, in Havana Harbor. By 5 p.m. that day, the State of Ohio had received orders from Washington to muster its units for volunteer service. Telegraphs went to the various regimental headquarters directing the immediate mobilization of their companies.

Anticipating the call, the Ohio National Guard had already directed the recruiting of new companies to complete the formation of all regiments and separate battalions. In addition, existing companies were permitted to recruit additional men to bring units to wartime strength. Ohio fielded eight infantry regiments, an infantry battalion and one regiment each of light artillery and cavalry, with the infantry units being organized into two brigades.

On APRIL 27, orders were issued directing the movement of troops from their local armories to Columbus. Bullitt Park, located a few miles east of Columbus in the modern-day city of Bexley, was chosen as the general rendezvous and was named Camp Bushnell, in honor of then-Ohio Gov. Asa Bushnell. Maj. Gen. Henry Axline, the Ohio adjutant general, was placed in command of the troops and oversaw the mobilization process. Troops began arriving on APRIL 28, and the entire Ohio National Guard was in camp by MAY 5.

The camp was broken into regimental areas and was further broken into rows of tents known as company streets. The camp had electric light, and water pipes had been laid out through the camp. The Soldiers lived in large canvas tents, with each man sleeping on a straw filled mattress. Company kitchens prepared meals that consisted of coffee, bread and butter, bacon, beefsteak, eggs and boiled potatoes. Care packages from home supplemented the military food rations.

Mustering officers from the Regular Army were on hand to oversee the process of converting citizens to Soldiers. Because federal laws prohibited the militia from serving outside of the borders of the United States, the men were mustered in as volunteers and maintained their regimental formations and officers. After each officer and Soldier completed a series of medical evaluations, the company was then mustered into federal service. In turn, regiments were mustered into service after all the companies were accepted. Routine camp duties such as guard duty, mess duty, roll call, daily drill and parades occupied the Soldiers’ schedules.

By MAY 14, regiments began to leave Ohio at the direction of the U.S. War Department. The 1st Ohio Volunteer Infantry and 1st Ohio Volunteer Cavalry were the first to depart and were ordered to Camp George H. Thomas in Georgia. The two regiments were the first volunteer regiments in the U.S. to enter the field. The following days saw additional troops depart for Camp Thomas, as well as Camp Alger, Virginia and Tampa, Florida.

A second call for troops came on MAY 25. Additional companies were raised for some regiments who, in turn, joined their parent units in the field. A surplus of companies led to Ohio organizing an additional regiment, the 10th Ohio Volunteer Infantry, which consisted of a diverse group of infantry, artillery, engineer and naval militia companies. Axline resigned his post as adjutant general and was commissioned a colonel in command of the hybrid regiment.

Shortly after the final troops left camp, the land was returned to the city. The infrastructure that was constructed for the camp spurred the residential development of the area, and by 1908 the Village of Bexley was incorporated. In September 1934, a memorial boulder was dedicated at the northwest corner of East Broad Street and Drexel Avenue, marking the center of Camp Bushnell.