With food insecurity issues becoming widespread across the state during the COVID-19 pandemic, Ohio National Guard Soldiers and Airmen were called in March to provide extra support at regional food bank warehouses and local pantries, helping with food packaging and drive-thru operations.

In addition to that general support, about 15 Guard members helping at the Mid-Ohio Foodbank had a unique task assigned to them at an off-site location — build an urban farm.

Known as the Mid-Ohio Farm on the Hilltop, the farm located in Columbus’ Hilltop neighborhood just west of downtown will serve as an outlet for the food bank to have quick access to fresh, local produce while also serving as a place to provide hands-on education for the local communities.

Sgt. Jacob Eader, a fire control specialist assigned to the ONG’s 1st Battalion, 134th Field Artillery Regiment, was more than happy to use his skills as a carpenter — which he does in his civilian occupation — to help with the project.

Bo McMahon, a fifth-generation farmer whose family’s agricultural roots are in Nebraska and Florida, found his way to Ohio to become the farm manager for Mid-Ohio Foodbank. He expressed his gratitude for the Ohio National Guard and applauded their efficiency.

“Soldiers like Sgt. Eader that have a background and specific skills, that is so valuable having them out here,” McMahon said.

The Guard members’ drive and teamwork motivated him every day, McMahon said, and fueled his existing passion for his project even more.

“Everybody who’s been out here has been super excited about what they’re doing,” McMahon said. “I get energized seeing them out here and their willingness to help with everything.”

At the project’s outset, very few of the Guard members had formal training in the tasks related to constructing an urban farm, but what they did bring with them was a strong work ethic and a willingness to absorb new skills. Eader said this project has brought them together in ways that will benefit how they operate in their military environment.

“Some of these guys out here, they don’t know what they’re doing and that’s OK,” Eader said. “They’re willing to learn, and I’m willing to teach them. That bond together brings us closer and makes our work even better.”

The urban farm will not only be a place to grow produce, but a place to grow communities. McMahon said the site will eventually have a market, interactive cameras to stream into classrooms, and a kitchen where people can prepare dishes using the produce grown on-site. These are just a few items the farm will offer. McMahon said the possibilities are endless. He compares the farm to an ecosystem.

“Each thing depends on the other to thrive,” McMahon said. “It’s not just one thing, it’s everything. It takes everything together to become successful.”

McMahon’s philosophy on unity and Eader’s passion for teaching others have established the foundation of what this ongoing, community project will one day represent — a place where people can come together to learn and grow.

“Giving back to the community is what I joined the National Guard for,” Eader said. “It makes me feel this sense of camaraderie.” 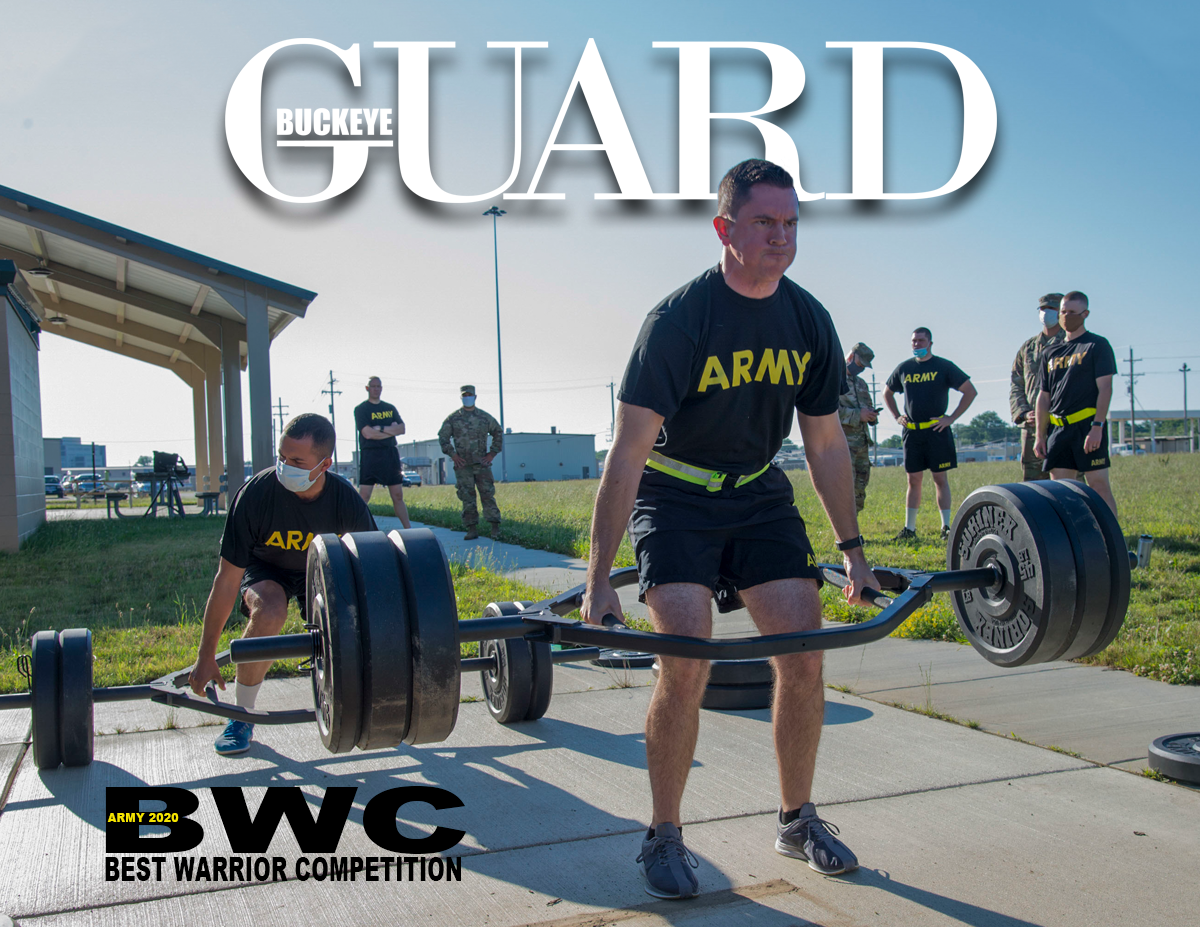 The Ohio Army National Guard’s finest took part in the 2020 Best Warrior Competition this summer. The Soldier and Noncommissioned Officer of the Year were crowned during the event, modified this year to account for health and safety considerations with regard to COVID-19.

Maintaining readiness amid COVID-19: Adaptability key to 179th AW’s continued training
For aircrew personnel at the 179th Airlift Wing, adaptability during COVID-19 has been key in maintaining mission readiness while following the necessary safety precautions and protocols during combat survival training.

Ohio National Guard helps build urban farm to grow Columbus communities
Guard members helping at the Mid-Ohio Foodbank had a unique task assigned to them at an off-site location — build an urban farm. Located on Columbus’ near west side, the farm will provide access to fresh, local produce while also serving to educate local communities.

Lineage Link Up
A closer look into the origins and lineage of the Ohio Army National Guard’s 323rd Military Police Company, which originated in July 1911, in Toledo, Ohio.

Historical Highlight
Sept. 2, 1945: Victory over Japan, or V-J, Day, marked the formal surrender by Japan to Allied forces, ending World War II. The 37th Infantry “Buckeye” Division was one of eight Ohio National Guard units that fought in the Pacific Theater and aided in the Allies’ ultimate victory.

Snapshots
A look at some of the Soldiers, Airmen and civilians who make up the Ohio National Guard Family.