Senior Airman Kristina Schneider, a fire protection journeyman at the 179th Airlift Wing, has been named one of the Air Force’s 12 Outstanding Airmen of the Year for 2022. The Outstanding Airman Program annually recognizes 12 enlisted members for superior leadership, job performance, community involvement and personal achievements.

To be one of the 12 Outstanding Airmen of the Year is a huge accomplishment for any Airman, but Schneider's story is exceptionally unique and inspirational. Schneider enlisted in the Ohio Air National Guard on Aug. 29, 2018, one day before her 40th birthday and the current maximum age limit for Air Force enlistment.

When asked what it means to her to be named one of the 12 Outstanding Airmen, Schneider said it was hard for her to believe. 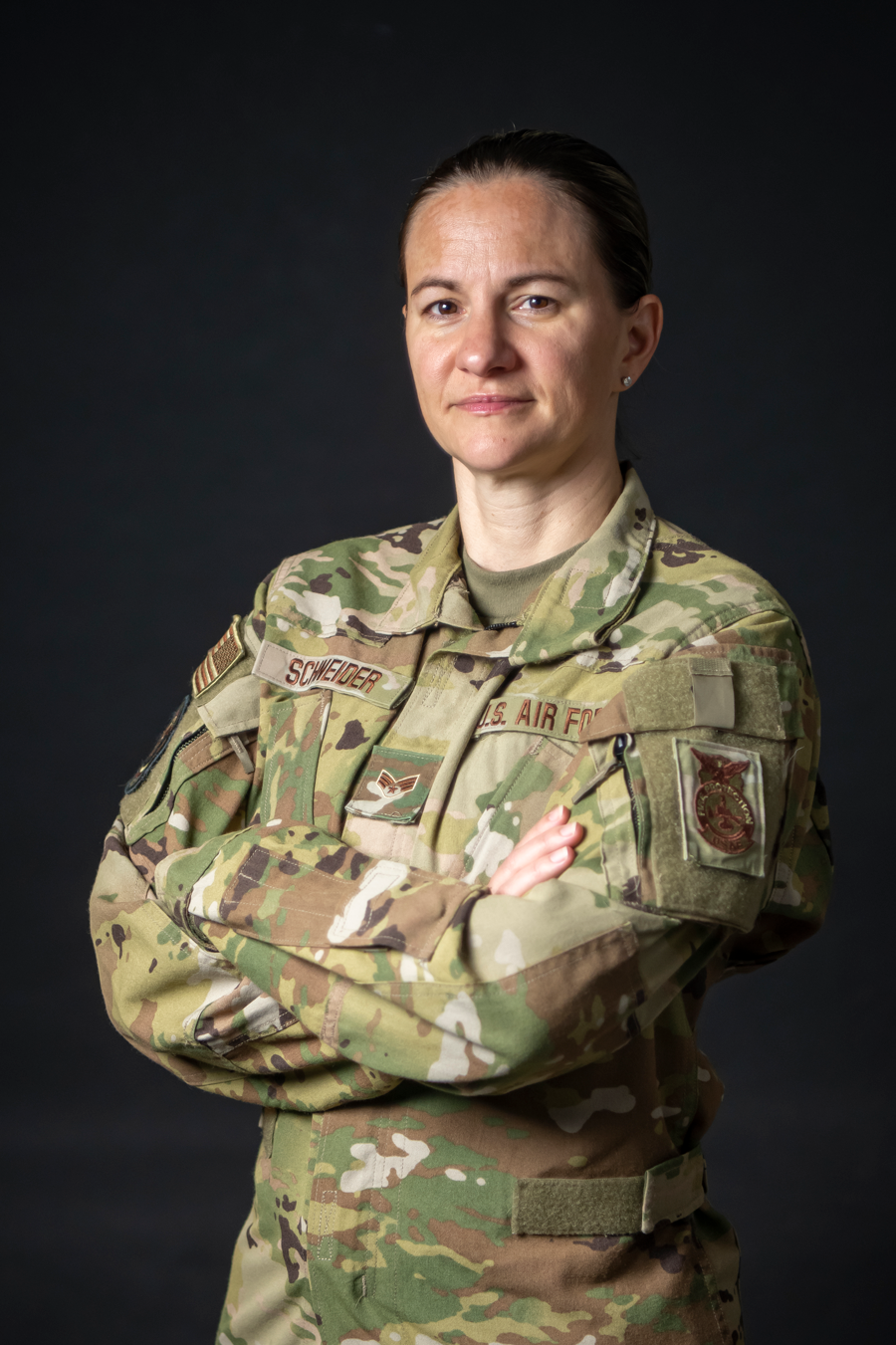 “That’s me!?
I’m one of the 12?
In my mind, I wasn’t doing anything special. I was doing my job. I was doing what was asked of me,” Schneider said. “It’s overwhelming and it’s humbling. It means a lot and I hope that I can inspire other women to think that they can do anything regardless of their age.”

“That’s me!? I’m one of the 12? In my mind, I wasn’t doing anything special. I was doing my job. I was doing what was asked of me,” Schneider said. “It’s overwhelming and it’s humbling. It means a lot and I hope that I can inspire other women to think that they can do anything regardless of their age.”

Schneider may be older than most Airmen, but her life experience set her up for success in the Air National Guard environment. The ANG often leans on personal experience and knowledge gained from traditional Airmen who often work full time in their civilian careers.

“It’s never too late to do anything that you want to do. I mean, I’m 43 now,” Schneider said. “Don’t hesitate, just go after what you always wanted if you really want it, you can do it.”

In the last four years, Schneider has been able to make the most of her Air Force career by living each day as a prime example of the whole Airman concept.

Schneider said that her “can do” attitude and passion for helping others has led her to say “yes” at every opportunity, both prior to enlisting while working as a firefighter and paramedic in Cleveland and now as an Airman serving in the Ohio Air National Guard.

She credits her leadership skills to her time as sergeant of operations in Emergency Medical Services for the city of Cleveland and an opportunity to lead Project DAWN (Deaths Avoided With Naloxone), a network of opioid overdose education and naloxone distribution programs coordinated by the Ohio Department of Health. This program allowed Schneider to experience an administrative role in EMS while teaching and helping in her community.

That experience in civilian EMS, as well as her paramedic experience, would lead to the confidence she needed to step up in a real-world emergency while in a deployed environment with the Air Force.

While deployed as an Air Force firefighter in 2021, Schneider’s leadership identified her as having the skill sets necessary to fill the urgent need for an EMT and neonatal provider in support of Operation Allied Refuge, the historic Afghanistan retrograde mission. She assisted in the evacuation of 54,000 Afghan refugees and medical treatment of 12,000 patients. Schneider was on a team with two Air Force pararescuemen, two medics and two drivers. They had two pickup trucks and one ambulance, and were responsible for the first response and triage of refugees landing in Qatar from Afghanistan.

“We would drive onto the flightline to respond to the incoming planes carrying Afghan refugees and treat all of the medical emergencies. People would be sitting on the planes for up to 12 hours, with anywhere from 200 to 300 individuals on each plane,” Schneider said. “The temperature was in the 120s and people were passing out.”

Schneider said that structure is hard to come by during a crisis, but it was important for her to remain calm and fully focus only on the patient in front of her. With 10 years as a paramedic, Schneider had plenty of experience to lean back on, creating her own structure and protocols that mirrored as closely as possible to what she was familiar with from her previous experiences.

"I made my own jump bag with the things that I needed and then responded. I was just doing what I know, treating the patients and how they presented," Schneider said.

Schneider recalled how emotionally draining it was to be surrounded by so many displaced people — scared, injured, fleeing their home and running for their lives.

“It was heartbreaking, but I just focused on helping these people. Knowing they are safe here; it brought tears to my eyes. Little girls coming up to me treating me as a hero because they had never seen women doing this type of work, a mother telling me that her daughter was looking up to me,” Schneider said. “It really made me focus on my life. Like, wow, I really have it pretty good and I knew that I was there for a reason.”

After achieving many accomplishments on deployment, all the while dealing with a strange feeling that something was off with her body, Schneider discovered she was pregnant. A pregnancy test taken before she deployed had been negative, and another during her service overseas was also was negative. Before an ultrasound confirmed her pregnancy, a total of four tests had been taken, all of them proving to be false negatives. She was 17 weeks pregnant when she found out and returned to Ohio immediately, later giving birth to a healthy baby girl.

“I came up with what I wanted to name her,” Schneider said. “I wanted her name to mean something and reflect that she was over there with me and so she did good things too. Her name is Liberty.”

Back in Ohio, Schneider facilitates medical training for the fire department at the 179th Airlift Wing. She also volunteered to serve during the COVID-19 pandemic, working at the Community Vaccination Center in Cleveland and at an area food bank, where she assisted fellow Ohioans who were faced with food insecurity. Schneider says that the most rewarding part of being in the National Guard is to see the instant effect the Guard has on the local community.

“To see the community members so excited or so grateful, it’s just rewarding and so humbling,” Schneider said. “To have the opportunity to do it in my hometown, the city of Cleveland, that’s my city, and I get to help the people on a bigger level.”

While Schneider’s determination and passion for helping those around her have earned her this big personal accolade, she said she recognizes that the National Guard’s ability to help comes from each individual member showing up and doing their part.

“One little thing can make an impact,” Schneider said. “All of us coming together doing our own individual little jobs create a huge impact.”