Chief Warrant Officer 5 Jay K Stuckman has had a long, successful career in the Ohio Army National Guard. Stuckman enlisted when he was still in high school and rose through the ranks to become a chief warrant officer five and the state command chief warrant officer, a position he has served in for close to a decade.

A fourth generation Ohio Army National Guard Soldier, he will retire soon, after 37 years in uniform.

“I’ve had the pleasure of working with some of the most talented warrant officers in the nation. Together, we were able to align the warrant officer cohort with our officer grade counterparts by implementing the Warrant Officer Ranking Board,” Stuckman said. 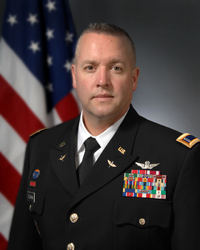 “I’ve had the pleasure of working with some of the most talented warrant officers in the nation. Together, we were able to align the warrant officer cohort with our officer grade counterparts by implementing the Warrant Officer Ranking Board,” Stuckman said.

Another person who had an influence on his military career was his father, Pete Stuckman, who served 40 years as a full-time Guard member.

“As a full-timer, he not only had the responsibility to maintain unit readiness and Soldier care, but the community relied on him, other unit members and equipment in their time of need,” Stuckman said of his father’s service.

Stuckman’s service has included two deployments that made an impact, as he deployed to support Hurricane Katrina recovery efforts in 2005 and he went to Iraq with the 1st Battalion, 137th Aviation Regiment in 2009.

His leadership has also had an impact on others, including Chief Warrant Officer 4 Richard Kerwood, who has been selected to succeed Stuckman as the state’s top warrant officer.

“I think the biggest lesson I’ve learned from him is his inclusive leadership style,” Kerwood said. “He’s a calm, level-headed and deliberate leader who enables all to have a voice in the management of the team. Including all perspectives permits the best possible solution to challenges, while encouraging buy in from our members for the cohort’s direction.”

As he has seen many successes in his career, Stuckman credits the support he has received from his wife as the most critical in enabling those successes.

“I would like to thank my beautiful wife and best friend, Jenny, for all the love, support and sacrifices that she has made so I could focus on my career,” he praised. “While I was either off at a school, annual training or deployed, she was home, devoted to raising our two sons while taking care of a household and working full-time as a kindergarten teacher.”

After a 37-year military career that has included shaping the Ohio Army National Guard’s Warrant Officer Cohort path for nine years, Stuckman is now ready to close that chapter and prepare for the next in retirement.