Hill of Heroes: Marking the 75th anniversary of the Battle of Hill 700

Across the span of warfare, many Soldiers’ accounts of life in the military during war boils down to long periods of boredom, surrounded by brief periods of sheer terror. This was certainly the case 75 years ago for the Soldiers of the 37th Infantry Division stationed on the Island of Bougainville in the South Pacific. What had been a relatively quiet and routine defensive operation turned into some of the bloodiest and most fiercely fought days the Buckeyes saw in their nearly 600 days in combat during World War II.

The 37th landed on Bougainville, a 3,000-square-mile island in the Northern Solomons Group, in November 1943. The Buckeyes’ mission was to establish a roughly 2-mile deep defensive perimeter around three airstrips, which would extend the Allies’ bombing reach in their island hopping campaign. The 37th held the line with the Americal Division on its right and for the first 2 1/2 months, little contact was made with the enemy. The line for the 37th terminated at a series of razorback ridges and a 700-foot-tall peak, identified on a map as Hill 700. It was the most important terrain feature in the area and offered complete observation of the coastal area, airfield and supply routes. And it was right where the Japanese 6th Division attacked on March 8, 1944.

At 6:27 a.m. the first Japanese artillery shells hit the ridge, which was defended by the 2nd Battalion, 145th Infantry, and a daylong bombardment began. The 37th Division Artillery answered with accurate counter-battery fire and pounded likely enemy assembly areas with great destruction. The 136th Field Artillery Battalion alone expended 1,231 rounds that day. A Japanese prisoner later admitted that a battalion of the 23rd Infantry was practically annihilated by the artillery. “Each time we fire one round, you send back a hundred in return.” he exclaimed.

That night, as rain and fog blanketed the area, a battalion of Japanese infantry slammed into Norwalk, Ohio’s Company G, 145th Infantry and its Soldiers, who refused to withdraw, and lived and died where they stood. As daylight emerged, it revealed the enemy had occupied a 70-yard-wide, 50-yard-deep salient (a piece of land or section that juts out to form an angle) into the American line. Company F, originally from Warren, Ohio, was rushed to blunt the enemy and made several courageous counterattacks up the 60-degree slope and in the face of rifle and machine gun fire. At one point, the 1st Platoon made it to within 20 yards of the enemy line, while the 2nd Platoon retook important positions on the right and held them overnight with no communications, water or food. During the course of the battle, Company F would sustain 66 percent casualties.

While the enemy salient was reduced, the position they occupied completely covered the main supply route (MSR) used by the Buckeyes. Supplies and wounded were initially carried in and out by hand over difficult terrain and under accurate rifle fire of the Japanese, who were only 25 yards from the MSR. Volunteers from the 37th Cavalry Reconnaissance Troop and 112th Medical Battalion, in armored cars and jeeps, ran a continuous gauntlet of fire to bring supplies to the hill and evacuate wounded.

On the morning of March 11, the Japanese sent wave after wave of attacking troops at Hill 700. Lt. Clinton S. McLaughlin of Company G dashed from position to position encouraging his embattled men while being wounded twice. When the enemy got within a few feet of the most forward position, McLaughlin and Staff Sgt. John Kunkel jumped in the hole and fired point blank at the Japanese, completely diminishing the attack. The enemy dead numbered over 185 in the area. Both men would be awarded the Distinguished Service Cross for their actions.

On the final day of the battle, March 12, Companies E and F, 148th Infantry were brought in to add fresh troops for the final push. The companies executed a coordinated double envelopment of the hill and went over the top together at 12:30 p.m. Company F was led by Lt. Sidney Goodkin, a pre-war Guard member from Ottawa, Ohio, who personally led the assault with painful burns on his hands and arms. While directing his men into positions that morning, a smoke grenade accidently landed on a box of white phosphorus grenades and caught fire in the hole he occupied. The smoke quickly filled the pillbox and threatened a number of wounded men who were also nearby. Seeing no alternative, Goodkin grabbed the burning grenades and threw them out of the hole, severely burning both hands. He refused to be evacuated and remained with his company until the battle was over. For his heroic actions, he would be awarded the Distinguished Service Cross.

“The Japanese forces on Bougainville Island have just suffered one of the most humiliating defeats in the history of the Japanese Army,” wrote Maj. Gen. Robert S. Beightler in an April 12, 1944, letter to the officers and men of his division. “Our forces proved on every count that they could out-scout, out-fight, and above all, out-live the best the Japanese empire had to throw against them.” 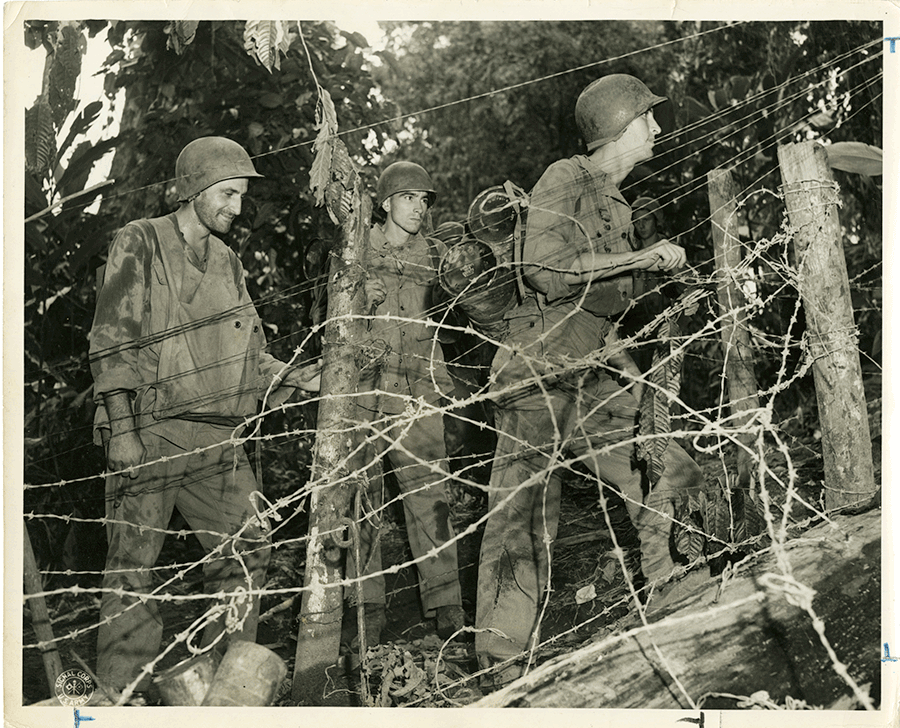 Pfc. Roy J. Naquin (from left), of Chacahdule, La., Staff Sgt. Donald A. Lyon, of Cincinnati, and Pfc. Perry l. Owen, of Des Moines, Iowa, all members of Company E, 145th Infantry, 37th Infantry Division, walk through a lane between barbed wire, carrying 60 mm mortar shells from the 2nd Battalion command post to the perimeter of Company F during the Battle of Hill 700, March 9, 1944. The battle, waged from March 8 to 12, 1944, on the Island of Bougainville in the South Pacific, was among the bloodiest and most fiercely fought days the Buckeyes saw in their nearly 600 days in combat during World War II. — Photo from Maj. Gen. Robert S. Beightler Collection-Ohio Army National Guard Historical Collections 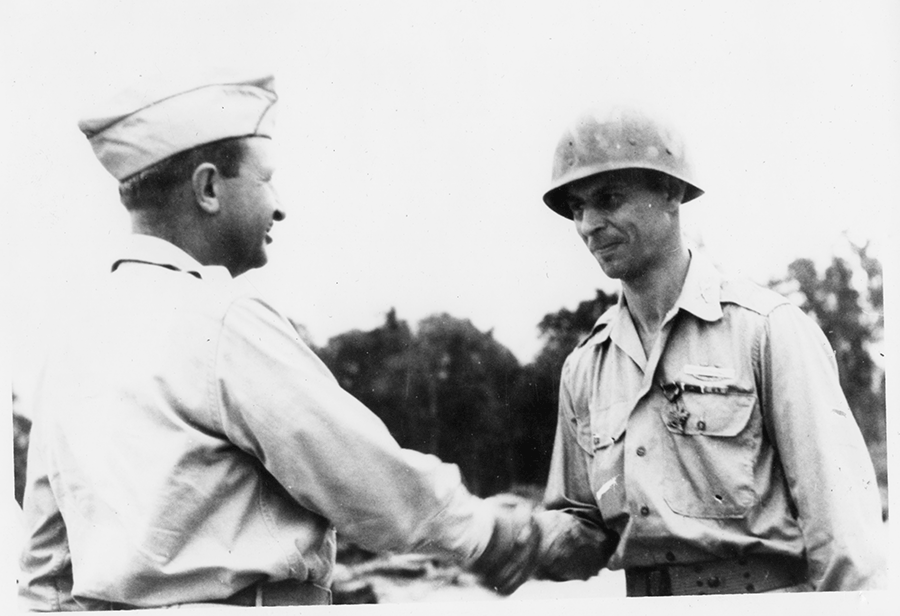 Maj. Gen. Robert S. Beightler (left), commanding general of the 37th Infantry Division, congratulates Lt. Clinton S. McLaughlin of Company G, 145th Infantry, 37th Infantry Division, after presenting him the Distinguished Service Cross during a ceremony in June 1944. McLaughlin was cited for his extraordinary heroism while serving as a platoon leader during the Battle of Hill 700, March 8-12, 1944, on the Island of Bougainville in the South Pacific. — Photo from Ohio Army National Guard Historical Collections 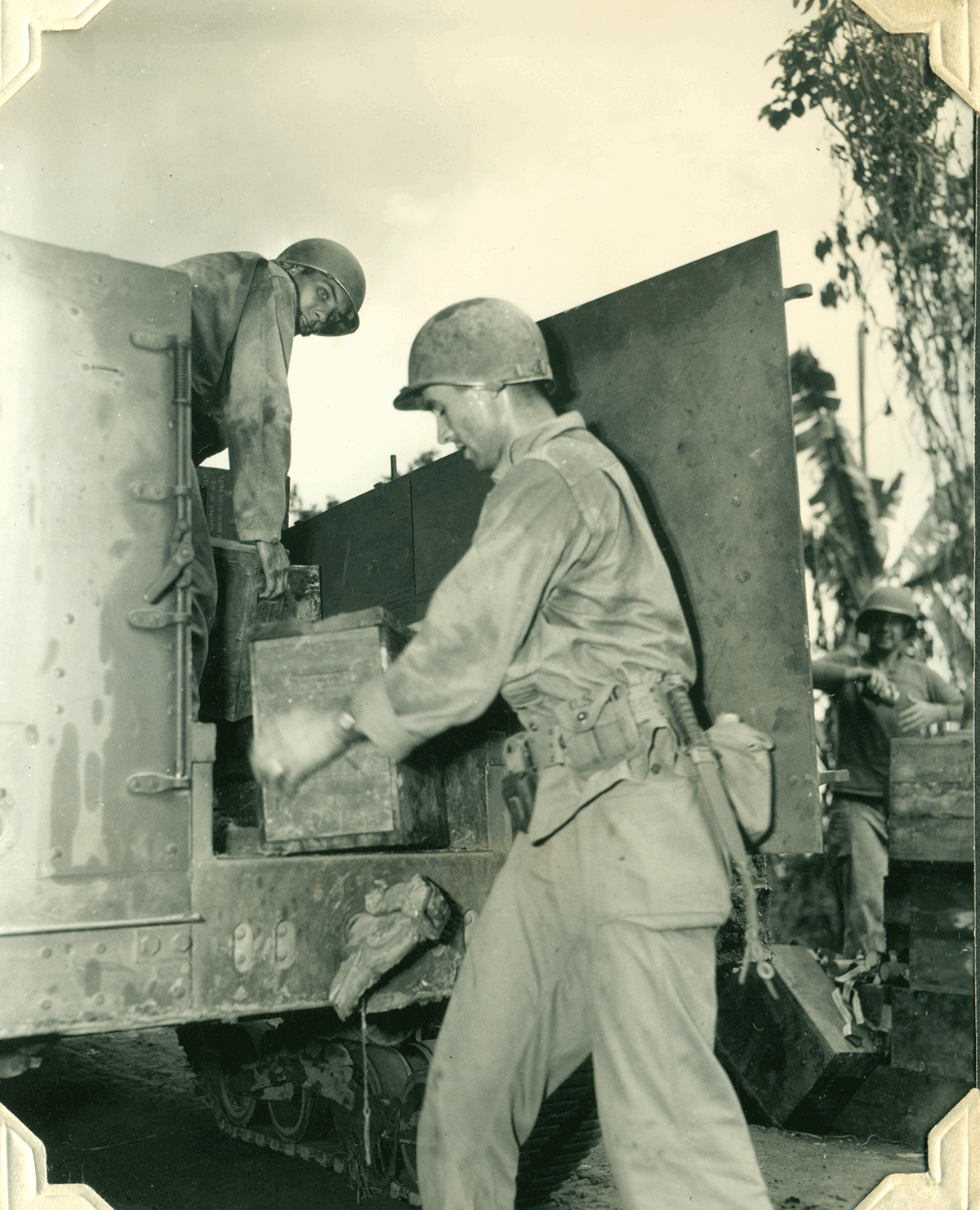 Soldiers from the 145th Infantry, 37th Infantry Division unload ammunition from the back of an armored car during the Battle of Hill 700, March 8-12, 1944. Seventeen of these armored cars from the 37th Cavalry Reconnaissance Troop made constant round trips on the exposed supply route to take supplies to the front and carry wounded Soldiers to the rear. — Photo from Maj. Robert B. Mearns Collection-Ohio Army National Guard Historical Collections 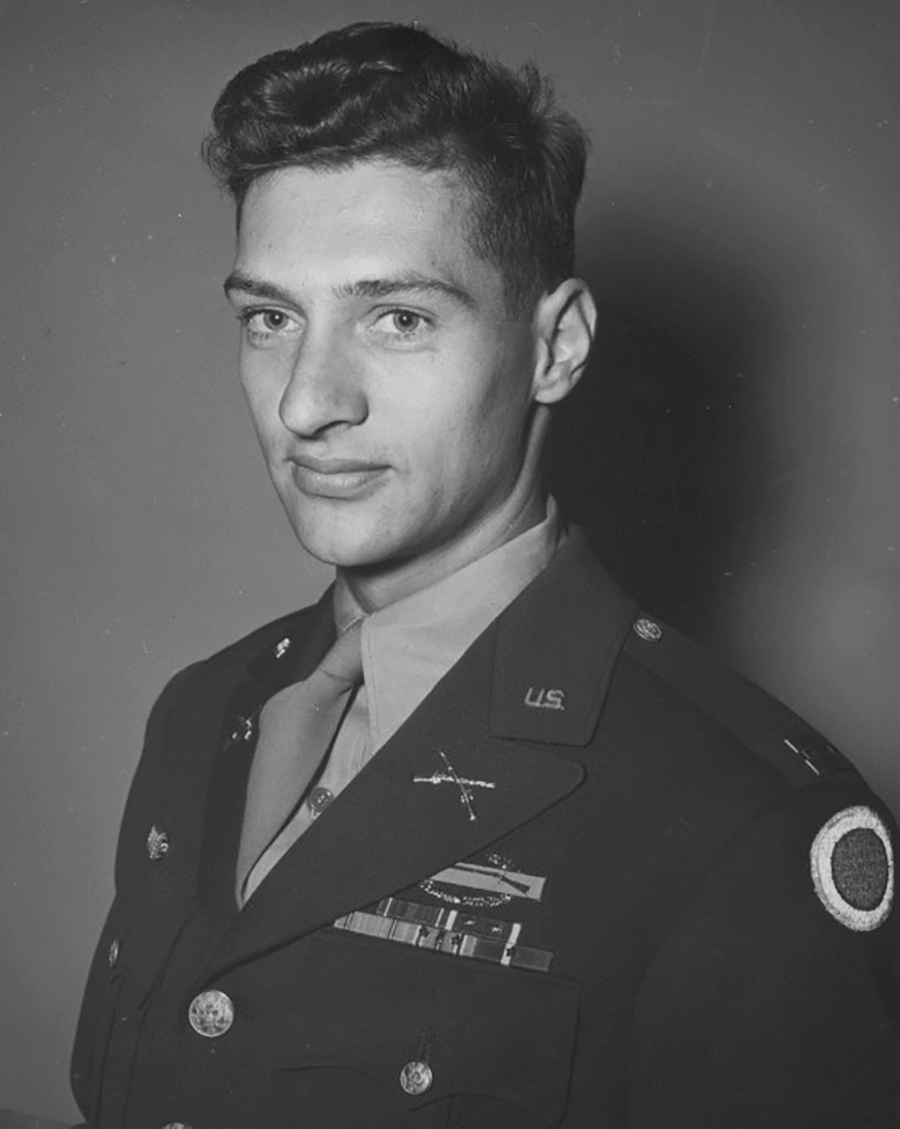 Capt. Sidney S. Goodkin, commander of Bowling Green, Ohio’s Company F, 148th Infantry, was severely wounded early in the Battle of Hill 700 on March 12, 1944, but refused evacuation until the hill was secure. He would be awarded the Distinguished Service Cross and Company F would be awarded the Presidential Unit Citation for actions during the battle, among the bloodiest and most fiercely fought days the Buckeyes saw in their nearly 600 days in combat during World War II. — Photo from Ohio Army National Guard Historical Collections